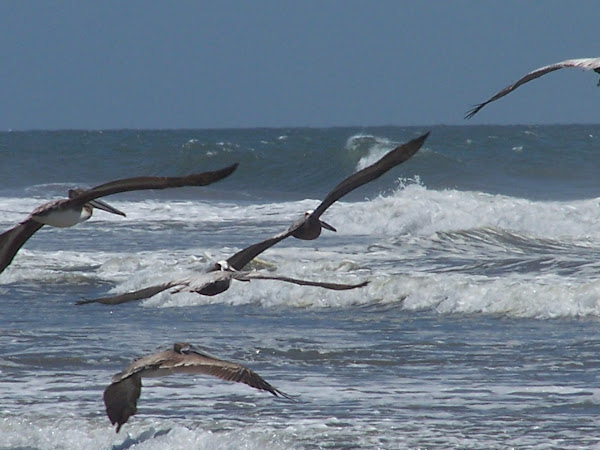 Terri B.
Mazatlan, Mexico
Retired to Mazatlan with my husband Mike, I teach one of the ladies Bible Studies at La Vina Church. One day several years ago we were at the end of our series, and also the end of the winter season, and I gave my testimony. Afterwards a friend of mine said, "You need to collect some of the ladies testimonies and put them together into a book, to encourage others." I began doing just that and have a stack of wonderful stories to share. I was recently encouraged to put them into a blog, so that is what I am doing. I pray that these stories, all of which are true, will encourage others. To see that other people go through tough times, but when you have a faith in God, He makes all the difference. I would also like to have you write your story and send it to me, knowing I will share it with others. First names only.

In a Bible study last year we had watched a Luis Giglio video.  He shared how in the world we will have trouble.  He said people don't like to hear that, but scripture tells us that and it's true.  So who am I and what has God done for me?

Here is how my four year old grandson sees me.  He was drawing his family picture: his mom, dad, two brothers, himself, Buster the dog, papa Del and then he turned to me and said, "Nana, I have to draw you BIG and WIDE."  I told him that was OK.  So he began to draw - this HUGE person with messy hair.  I thought, "Oh NO, the kids sees me as a huge monster with messy hair."  He must have seen the look on my face and he said, "That's your bed head" and he kept drawing and then redeemed himself as he made a big smile on my face that went from ear to ear.  I hope that is how people see me.  A happy person filled with God's joy.

I had a normal childhood with some Bible teaching, but didn't come to know the Lord personally until I was thirty years old.  I was married to Del and we had two children, Christine and Steven.

We were community leaders in the small town we lived in along with our close friends Scott and Linda.
Linda learned of a Bible study going on, and I decided to go with her.  I joined in the conversation but at the close of the evening, one of the ladies said to me, "Sharon, you have Bible knowledge, but nothing in your heart."  I asked her what she meant.  She told me to read John chapter 3.  In the quiet of my bedroom that night I read John 3 and when I finished I asked Jesus into my heart.
Within a few months all four of us - Scott, Linda, Del and I knew the Lord personally, and we changed dramatically.

We moved back to a town we'd lived in before and the word was out that we were Christians now.  I guess everyone wondered what we were like now, so a group of the ladies sent a friend over to check me out.  She went back to report that I still had the same personality but I didn't swear anymore.

We had our third child, a daughter Colleen.  We were dedicated to raising our children in a Christian home.  We moved again and became very involved in our local church.  We lived a normal life.

In 1991 our oldest daughter Christine graduated and went off the Bible College in the fall.  She finished a year there and then went to college to become a teacher.

When Christine was twenty-one she became pregnant and was very sick, so she quit school and had the baby.

When our new grandson Mitchell was a month old, Colleen and I went to visit them.  I stayed at my parents home.  Late one night there was a knock at the door.  I answered the door and Christine was there with two police officers.  This was every parent's worst nightmare coming true.  One of the police officers said, "Steven is dead and Tamara is critically injured."  I went into deep shock but I remembered them telling me Steven shot Tamara and then turned the gun on himself.  Tamara was his girlfriend whom he loved very much.

I was connected by phone to the police in our town and the office said to me, "Sharon, can you help us shed some light on this?  Was Steven on drugs?"
I said, "I know he had tried steroids but he didn't like what they were doing to him so he threw them out."  The officer said, "That's the missing piece to this puzzle."

We were ignorant about steroids at the time but learned later that steroids are a drug that you have to be weaned off, you can't just quit cold turkey mid cycle, which is what Steven did.

Our lives changed forever that night.  Steven was dead and Tamara was paralyzed from the waist down.  We couldn't see Tamara at first because the incident was being investigated as an attempted murder/suicide.  After the investigation it was called an accidental shooting/suicide.  We'll never know the whole story of what led up to that night, we just know the results.

A few days after this happened, I remember our youngest daughter asking me, "Mom, will our lives ever be normal again? - whatever normal is."   I couldn't answer that question, but I could tell her that God loves us and He will get us through and I can still say that today.

We wanted to do our best for Tamara so we made arrangements for me to take her to the Mayo Clinic in Rochester, Minnesota.  Just before leaving, we stopped at the local high school where I worked and told the vice principal about what I was doing.  She said "Rochester, Minnesota, my aunt and uncle and cousins live there, I'll phone my cousin to look after you."

Her cousin wasn't sure at first, but agreed to meet us at the airport and look after us.  The whole experience of being at the Mayo Clinic was overwhelming for us.  Tamara was told that the bullet couldn't be removed from her back as it was too close to the spinal column.  The doctor did tell her he would pray that she would walk again one day.  He also talked to both of us about Steven and we both told him we held no anger towards him.  Tamara's parents felt no anger towards Steven either as we all felt he wasn't in his right mind when he shot Tamara.

Some days we talk about our son and weep and weep.  Other days we can tell funny stories about him.  We loved him dearly and he loved us.  We were blessed to have him for eighteen years.

The Lord uses us to minister to families who have lost a child, the pain is indescribable.  It never goes away for us, but it does soften with time.

Our grandson Mitchell will be eighteen this month.  We now have six grandchildren.  We are blessed!

Tamara is still paralyzed but we pray for a complete healing for her.  She is married to a wonderful young man from the neighboring town, so we see them whenever they come home to see his parents.  They have a two year old son.

I am happy in the Lord and pray that each of you will be too - no matter what your circumstances are - God will help you through.  God loves you.
Praying for those who have lost children, hurting parents.